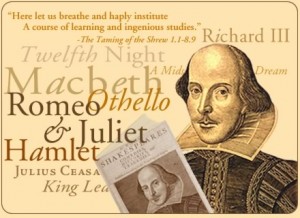 The works of Shakespeare are some of the most beloved of actors the world over. They can also be pretty intimidating at first glance, but they don’t need to be! In this week’s workshop we’ll get you on the right footing for reading Shakespeare — for performance and pleasure!

After directing 39 Steps at Richland Players and R&J at Richland High, Ellicia Elliott will be teaching a class on Shakespeare this week just in time for A Midsummer Night’s Dream Auditions!

The Actor’s Workshop is a weekly workshop series, Sunday nights from 6 PM to 8 PM.The class costs $20 as a drop in fee, or you can purchase a 5 week punch card for $80 and attend other workshops on such topics as dance, stage combat, and monologue work.

Who the Workshop is for

The Elliott Family: Ellicia Elliott, Geoff Elliott, and Malcolm Elliott (in arms).
Ellicia and her husband Geoff are such big fans of Shakespeare, they named their son after a Shakespeare character.

Ellicia Elliott is the award winning theatre director at Richland High School. She has been recognized by the 5th Avenue Theatre in Seattle for her directing and her educational outreach programs. She has directed over thirty productions; some of her favorites include The Diary of Anne Frank, Seussical, Macbeth, Once on this Island, Romeo and Juliet, and The Sound of Music at Richland High School, The 39 Steps at the Richland Players, and Revenge of the Space Pandas at the international Edinburgh Fringe Festival. She holds a Bachelor’s degree in Theatre Arts Education and a Master’s degree in Theatre Production, both from Central Washington University. She has continued her theatre training at the Oregon Shakespeare Festival and through a fellowship at Seattle Repertory Theatre.